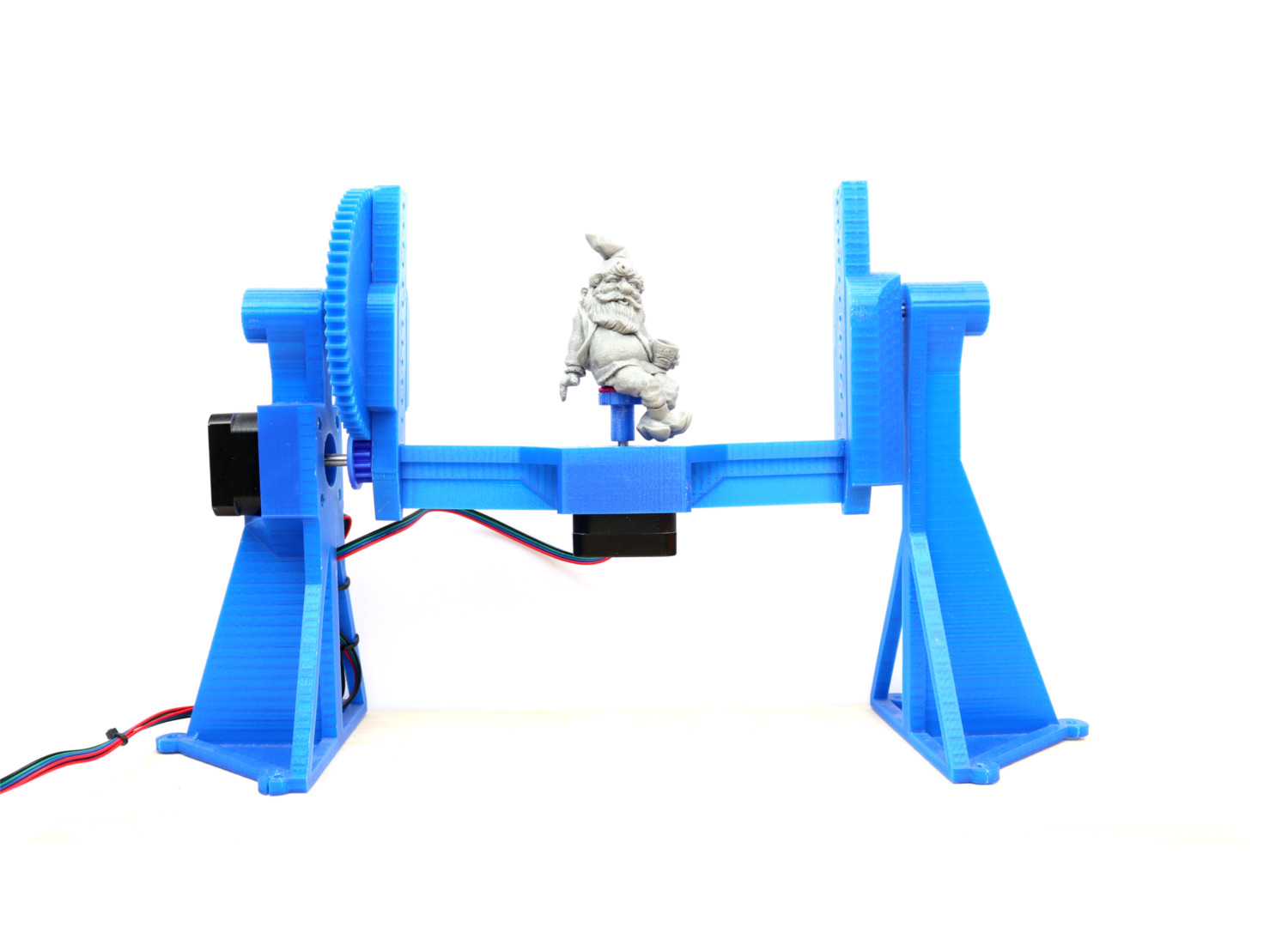 The OpenScan Classic is a compact desktop 3D scanner capable of scanning objects up to ~16 cm with an accuracy of up to 0.02 mm. The frame can be fully 3d printed, and all other components are off-the-shelf parts. You should be able to source all parts locally, or chose to support the OpenScan project by ordering (some) parts through Openscan.eu/shop. Currently, the following cameras can be used without any additional modifications: Arducam IMX519 16mp & autofocus, Pi Camera v2 8mp and Pi Camera v1.3 5mp, where the Arducam IMX519 has to be considered the gold standard (for now :). Alternatively, you can even use many DSLR cameras, which can be connected and controlled through the Raspberry Pis USB interface...

Get the printable .stl (and design) files TODO

Make sure to follow the right setup for your camera module (either Arducam IMX519 or PiCamera V1.3/V2)

See the sequence of the parts:

Make sure that the lens is properly centered (looking at the ringlight from the front as shown in the right image): 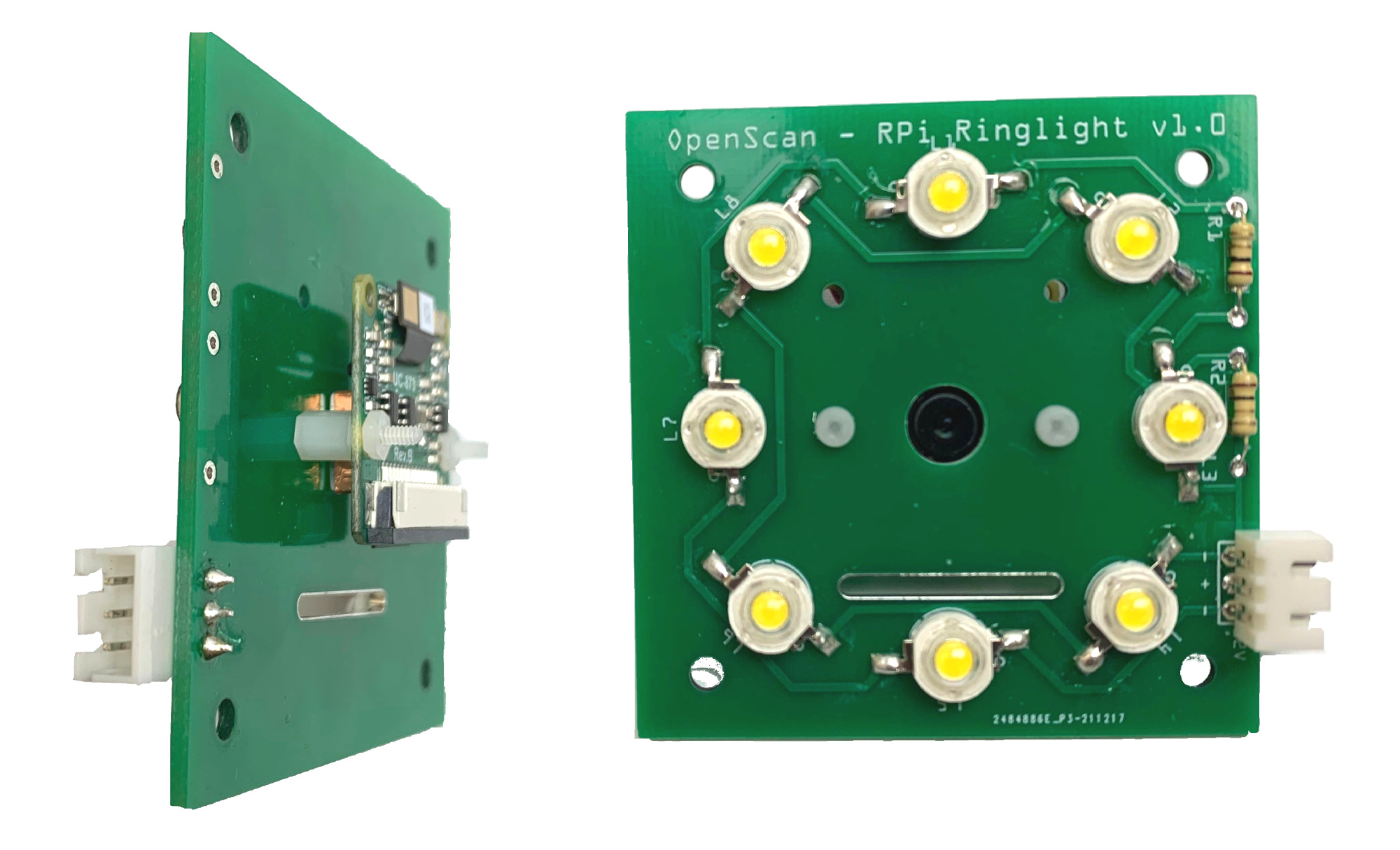 See the sequence of the parts: 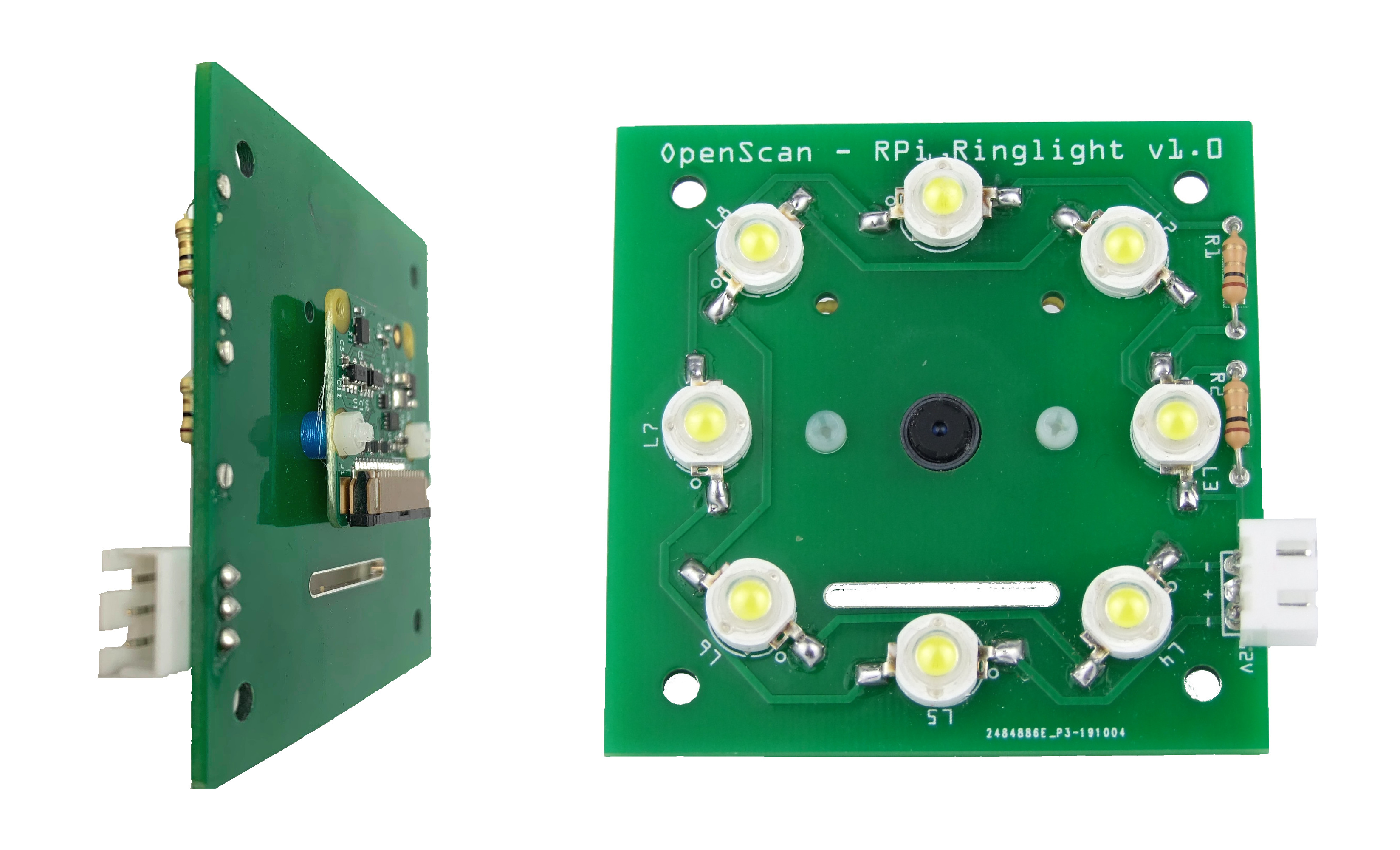 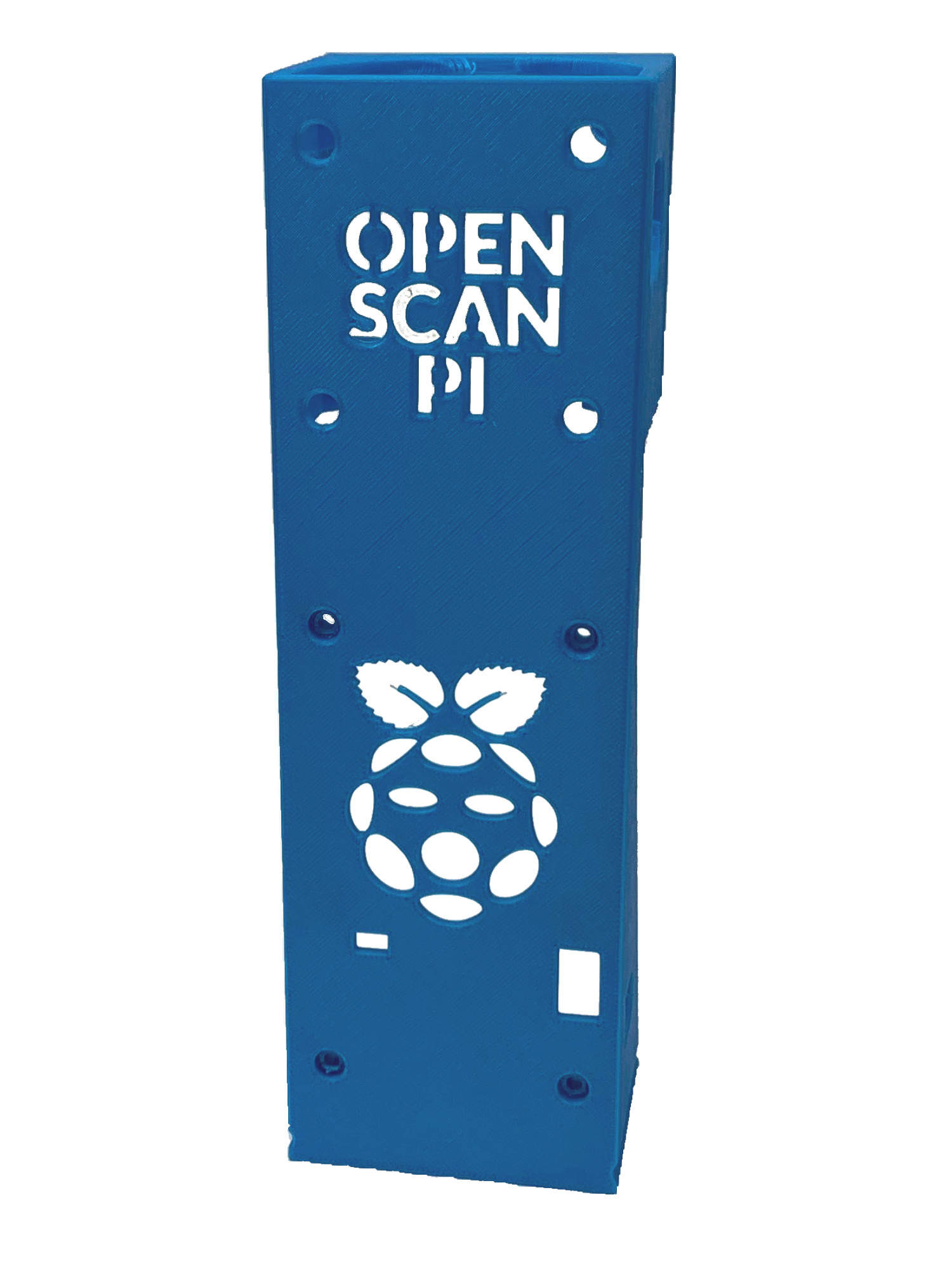 Use 8x M3x8 screws to mount the ringlight module and the Pi Shield in the following way: 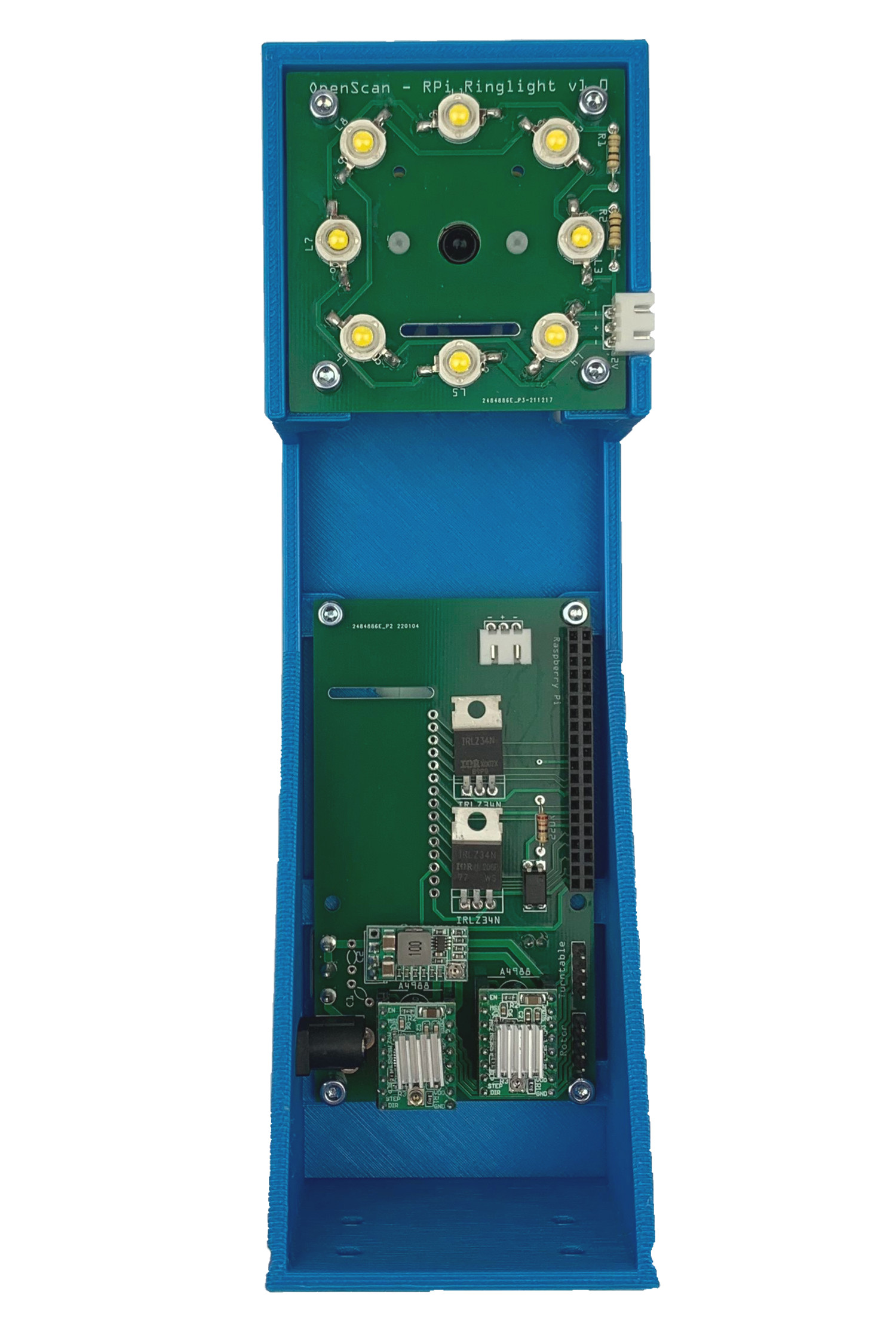 Connect the ringlight module and the pi shield with the 50cm ringlight cable, connect the motor cables: 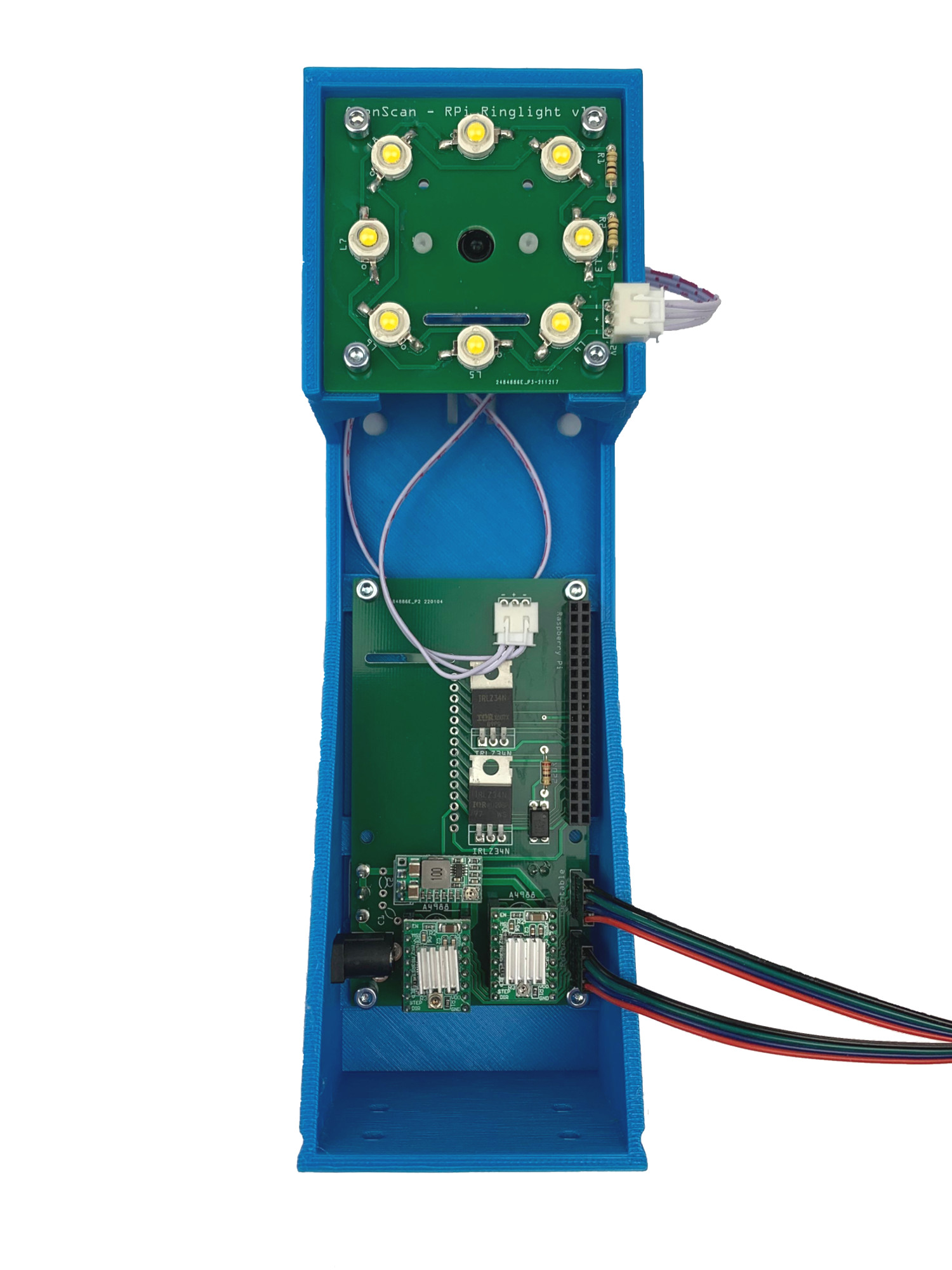 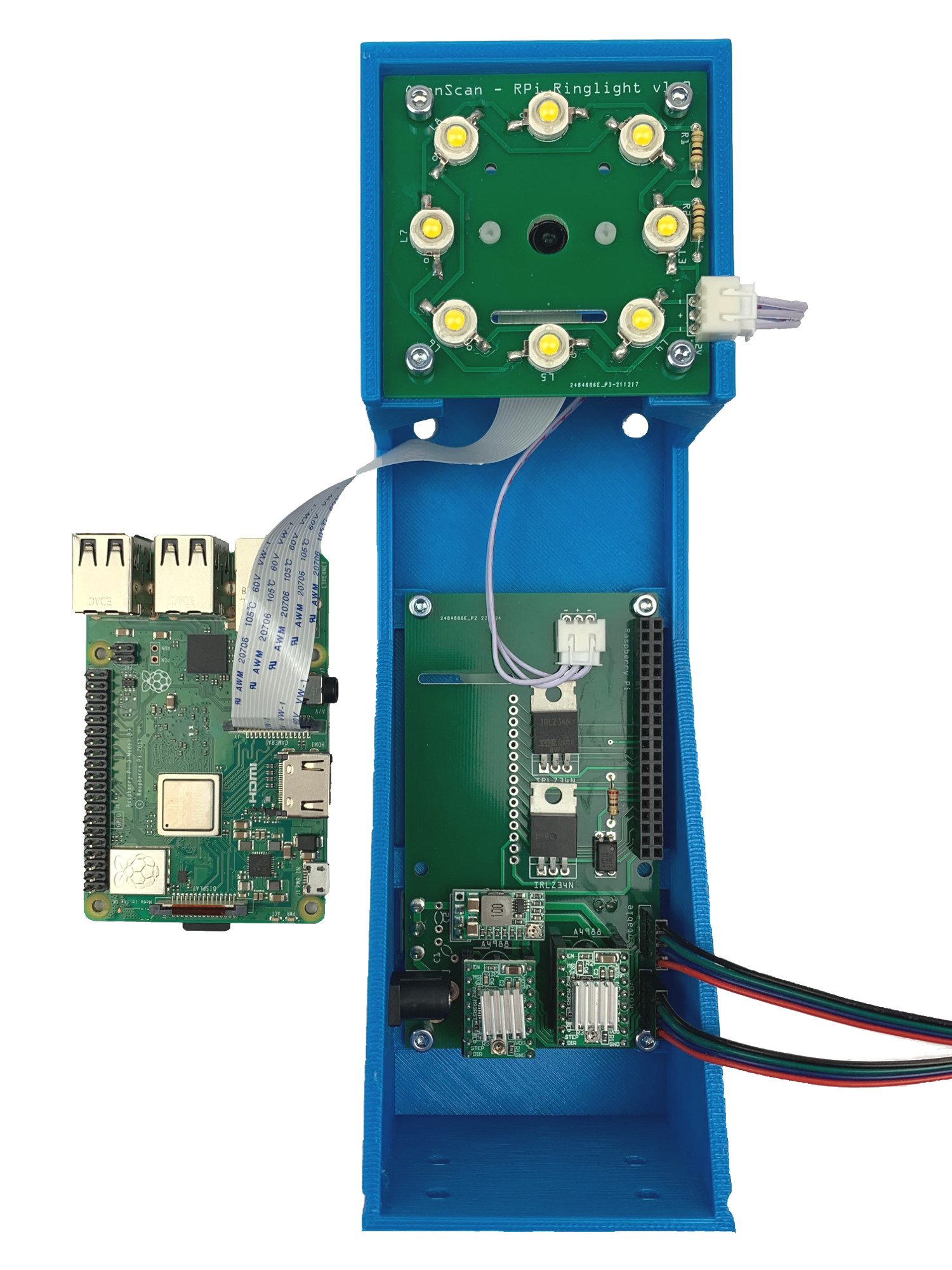 Your control module is ready to use and should look something like: 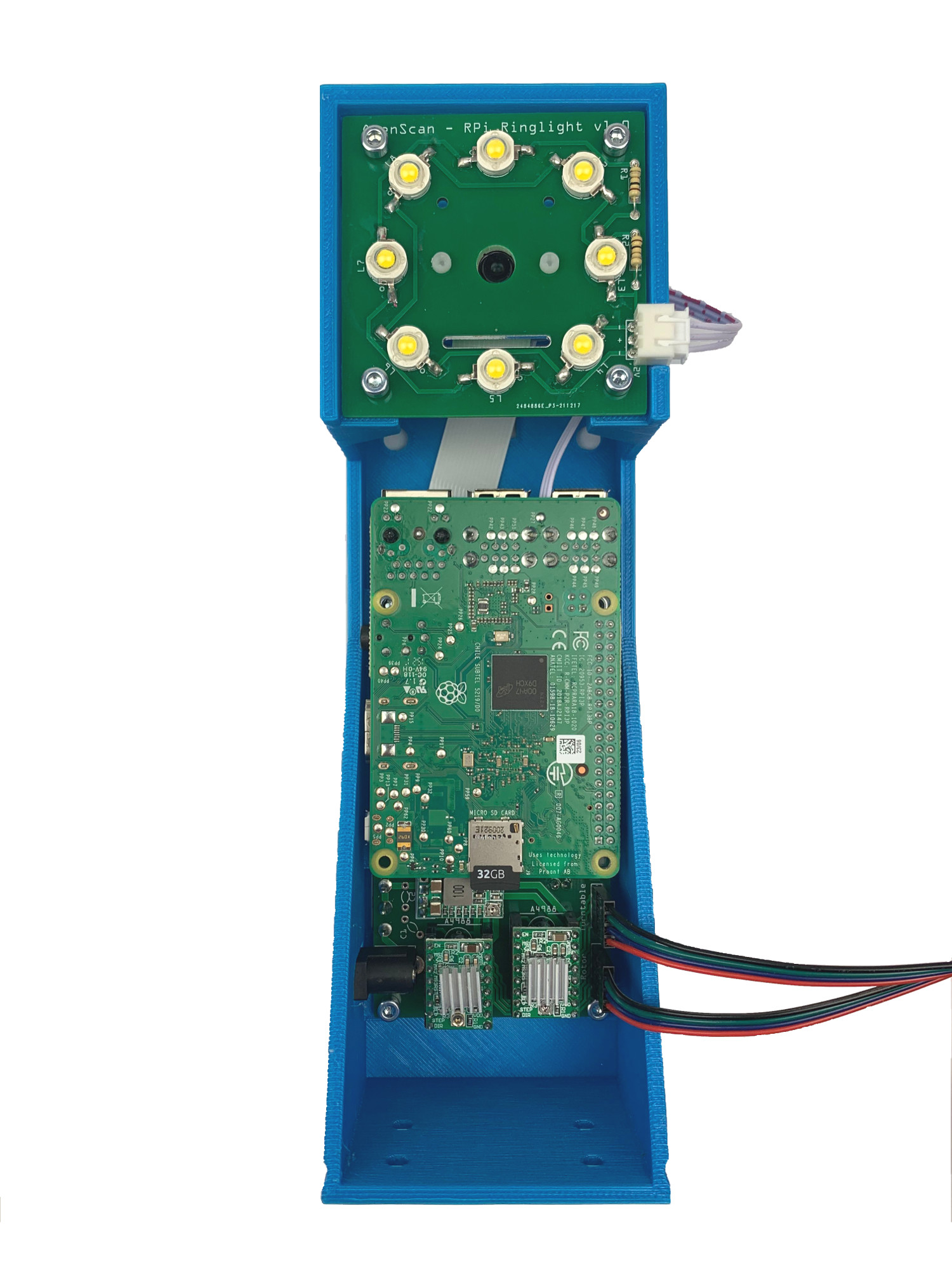 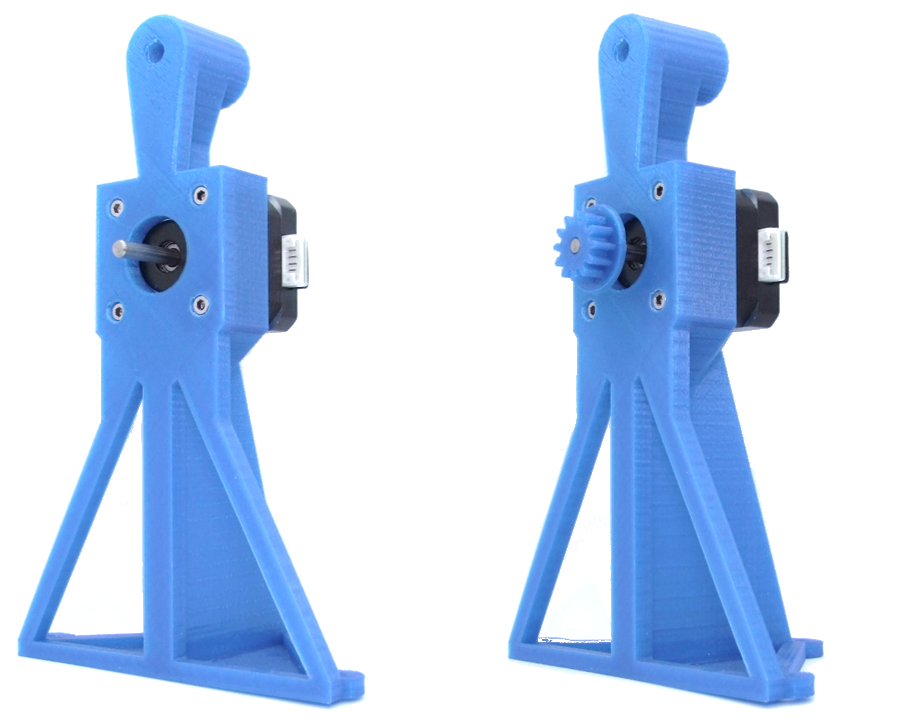 (left) Mount the stepper motor with four M3x8mm Screws onto the Stand1.stl.

Note: Depending on the printing accuracy, it may be necessary to pre-drill the screw holes with a 3mm drill bit. Furthermore the gear and the motor shaft might have a tight fit and you might have to „gently“ use the help of a hammer. 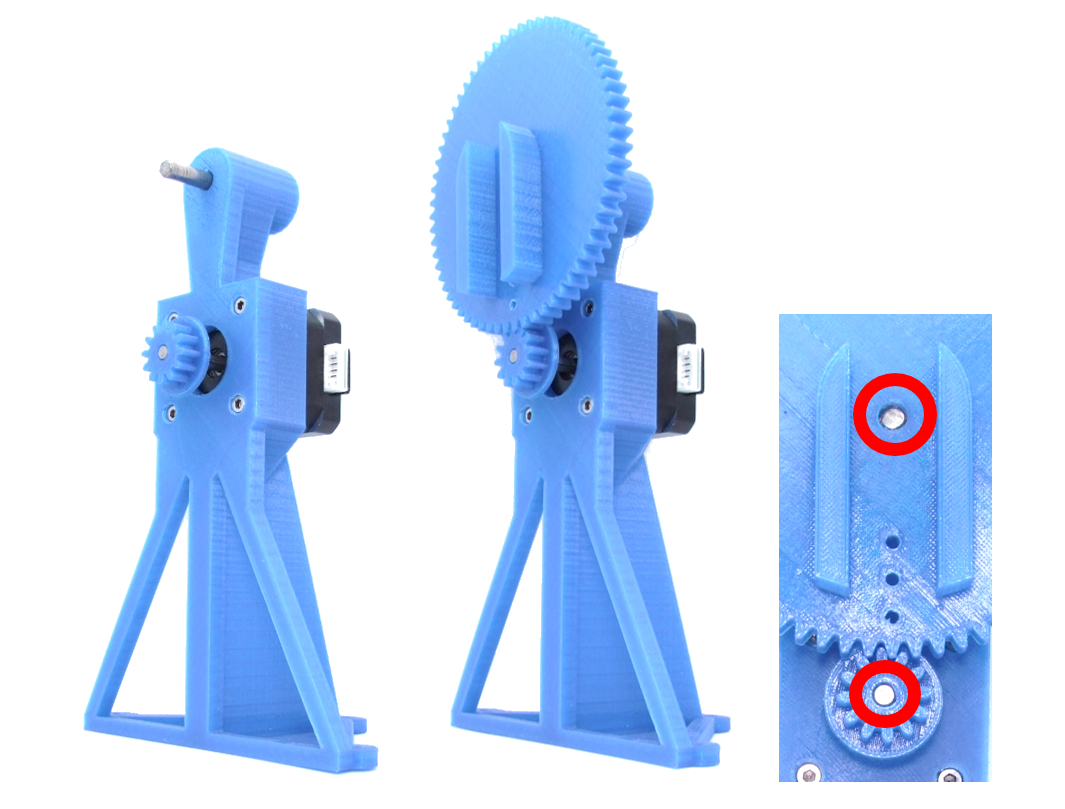 (middle) The larger gear (Adapter2.stl) is pressed onto the steel pin.

(right) The steel pin (top) and the motor shaft must NOT protrude forward from the components and should be flush with the surface. Superglue can be used to fix the position of the gears.

Note: Both gears should match well and rotate relatively resistance free. If this is not the case, it may be necessary to replace the small gear with v2.stl or adjust the printer settings. 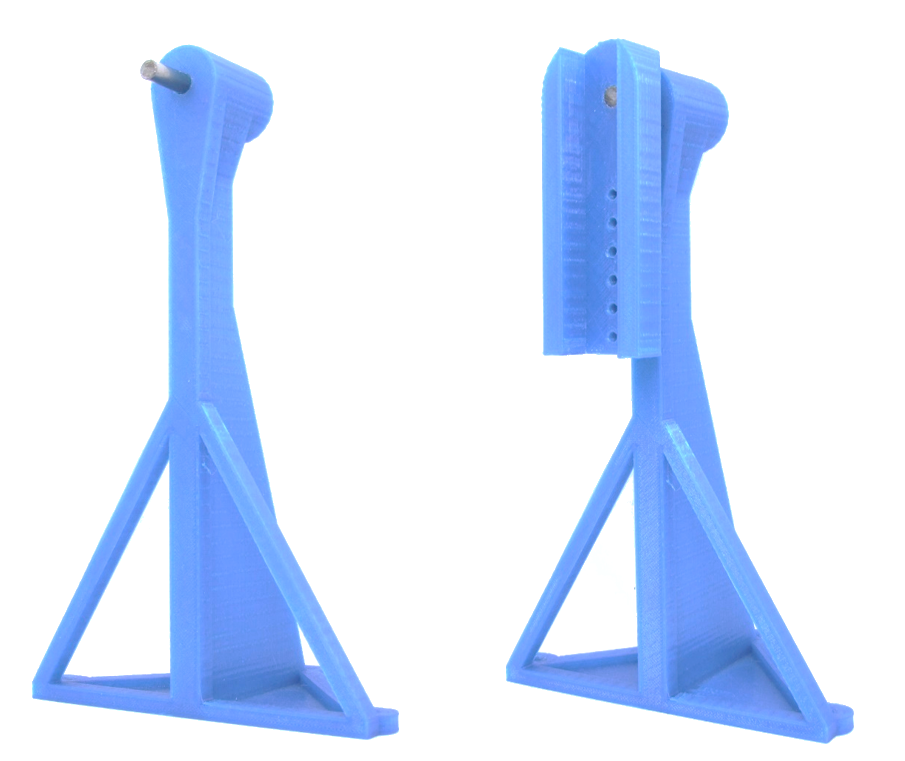 (right) The adapter1.stl is pressed onto the steel pin. It is important to ensure that the steel pin does not protrude forward from the adapter.

Note: The adapter can be fixed with superglue on the steel pin. It must be ensured that the steel pin can rotate freely in the stand.

Place the Rotary Arm (2x) on the sides of the turntable_base.stl (red mark) and press any Turntable_Adapter.stl onto the motor shaft: 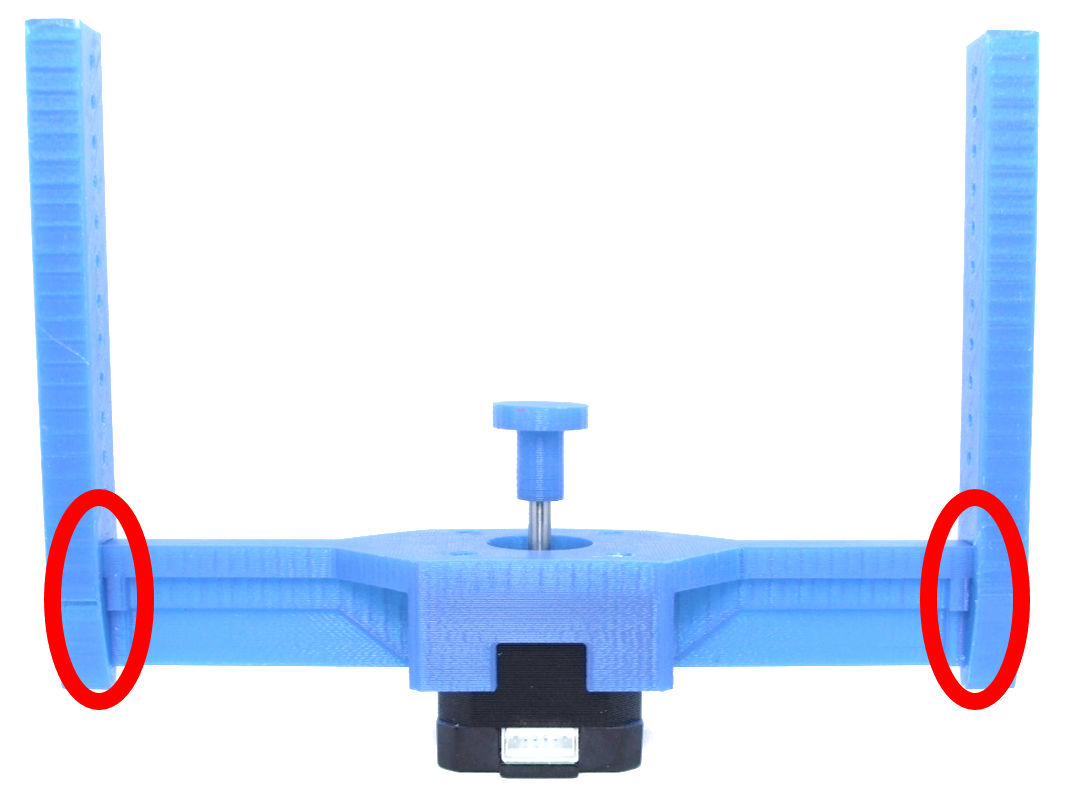 The connections marked red can be fixed with super glue if they are too loose.

Combine all prepared parts as shown: 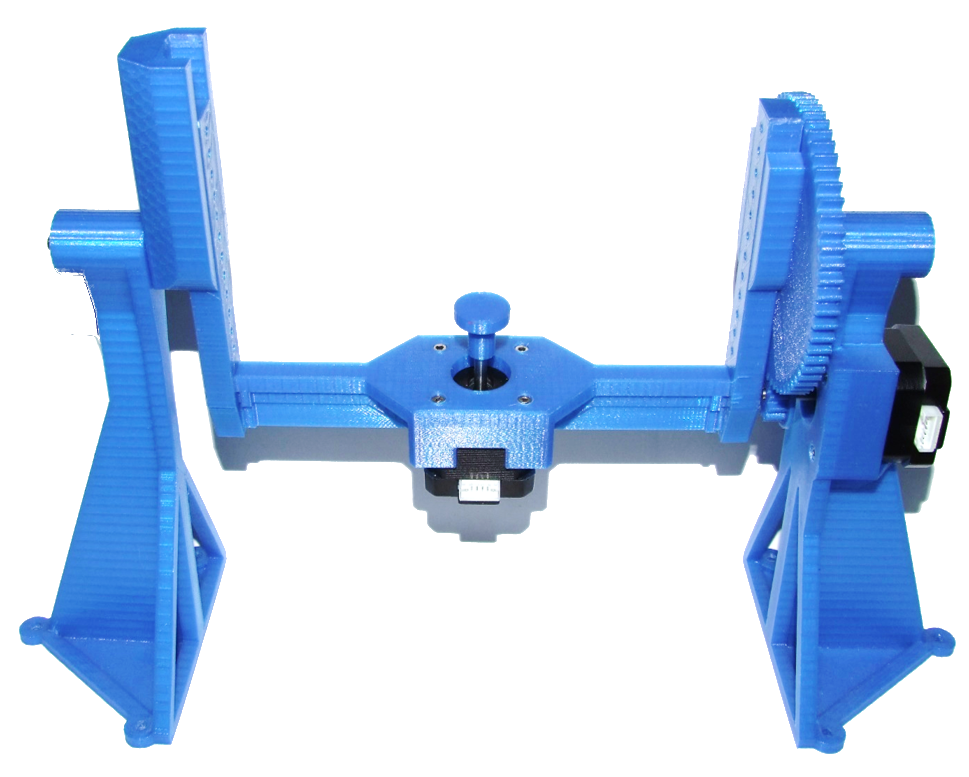 The height of the turntable has to be adapted for each scan object. 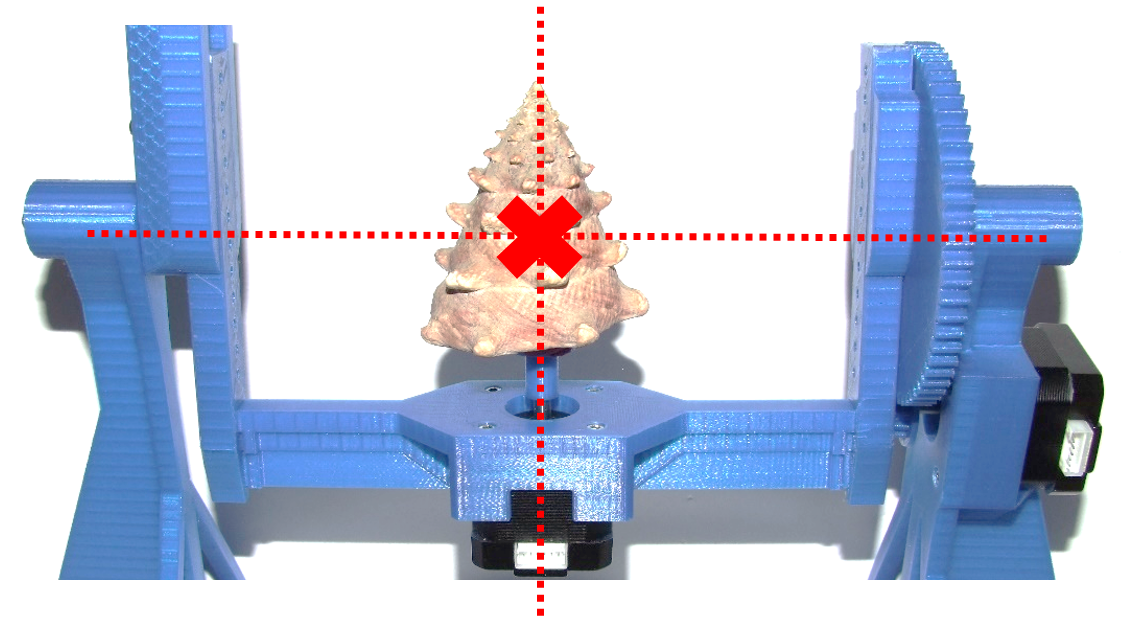 Object to high (left) and to low (right):

Insert two M3x12mm screws laterally into the adapters (red mark), so as to connect the side stands with the rotating arm (Turntable_Base + Rotary_Arm). 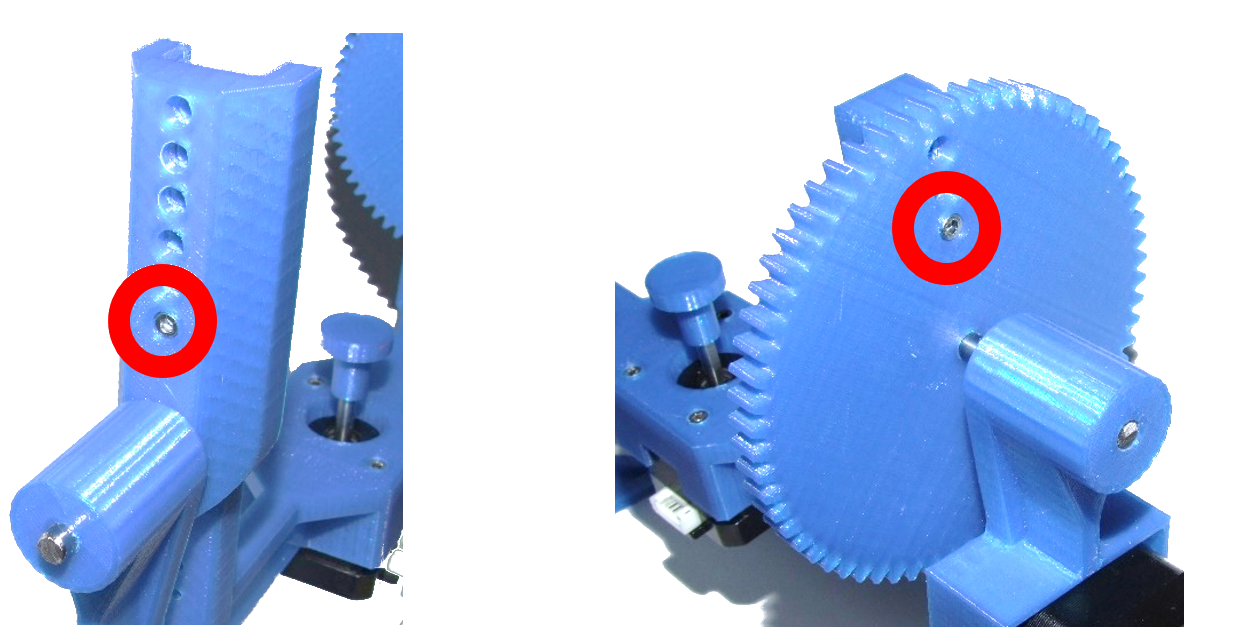 Connect the motors to the control unit: 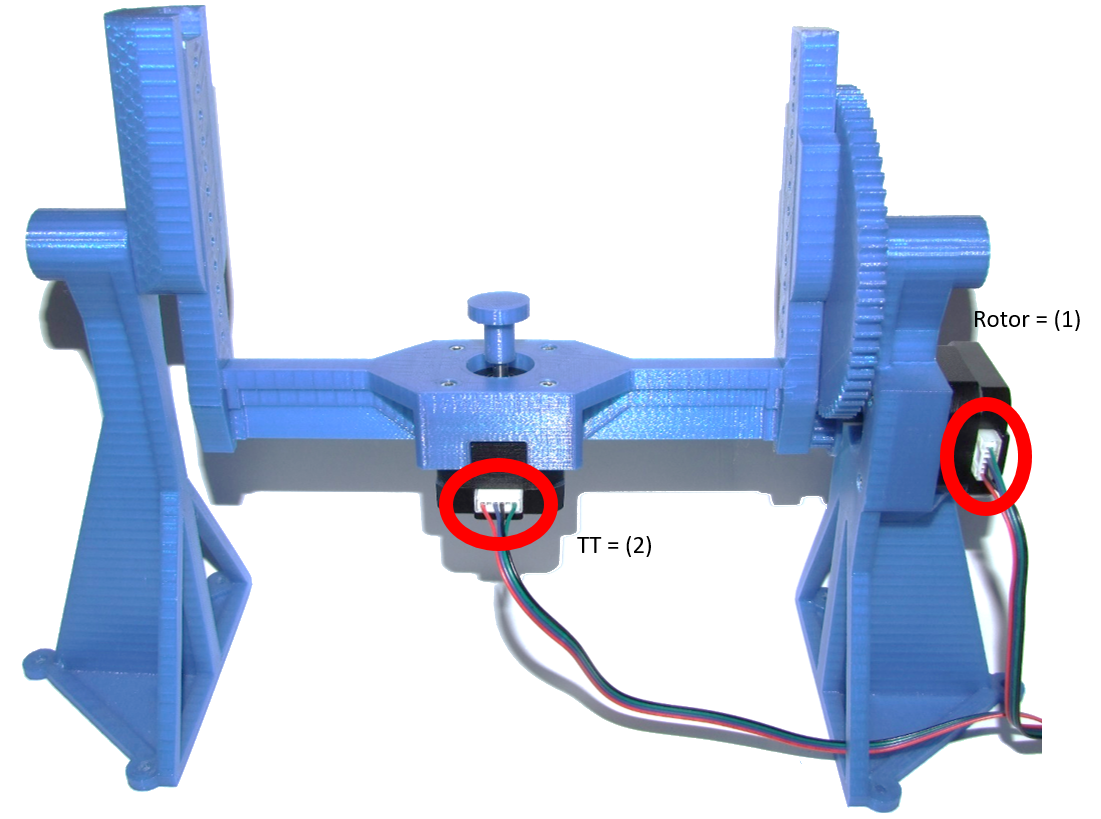 You can directly connect a camera via USB and use the OpenScan web interface to preview and capture photos automatically. . The functionality is based on the great GPhoto2 Library (see gphoto.org) and the number of supported cameras is huge.

NOTE: some cameras need to be set to a different operating mode (PTP mode).

See this list on gphoto.org to check whether your camera is supported. It is necassary that Image Capture and Liveview are listed.

For (almost) all cameras you can buy a relatively cheap remote shutter release. These modules can be modified easily and also connected to the Scanner’s main control unit.

A very extensive source for various camera models and home-made remote shutter release can be found on doc-diy.net.

An existing remote release can be modified with minimal soldering skill and a total of two soldering points. The following pictures describe the basic procedure:

Shortening those two wires will have the same effect as pressing the button and it should trigger the camera. Connect the modified remote shutter release control to the two pins exposed to the front side of the scanners control module as shown on the first image of this chapter.

This is another very typical remote shutter release. It contains three metal plates which gets pushed/connected consecutively (red circle). Creating a connection between the first and second metal plate will focus the camera. Wheras connecting all plates will trigger the shutter release.

Connect one wire each to the top and to the bottom metal plate. Shortening those two wires will have the same effect as pressing the button and it should trigger the camera.

Connect the modified remote shutter release control to the two pins exposed to the front side of the scanners control module as shown on the first image of this chapter.

A modified Bluetooth trigger can be used to trigger most smartphone cameras. The shown module is operated with a CR2032 button cell, which must be inserted on the back. As soon as the On / Off switch has been flipped, the blue LED lights up at regular intervals. The device must then be paired with the smartphone via Bluetooth. This can be done in the smartphone’s setting menu. The device should be visible as “AB Shutter 3” and has to be coupled accordingly 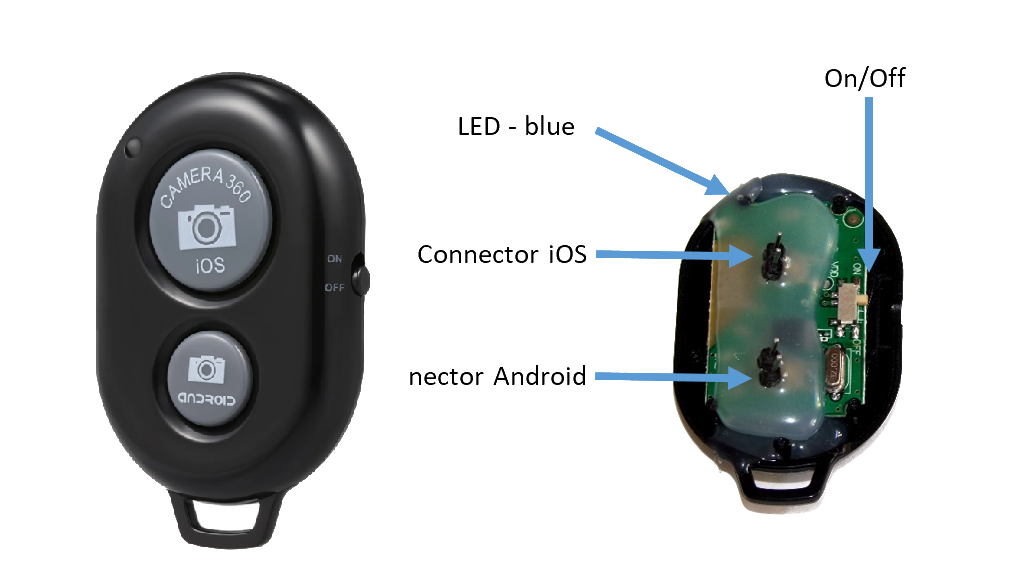 Connect the modified remote shutter release control to the two pins exposed to the front side of the scanners control module as shown on the first image of this chapter.